This is the clothing container. When the refugees arrive they are helped to get essential clothing items. Often the trip has ruined whatever they have or they have lost items or cloths have been damaged by the sea water during the transition from Turkey to Lesvos.

I have spent two weeks on the island of Lesvos helping with refugee ministry in a camp.  I want to start this newsletter by first thanking each one of you who played a part in helping me with this ministry.  Those who helped by praying for me during this trip, thank you so much, those who gave finances, thank you so much.  Those who sent messages of encouragement, thank you so much. This has been a remarkable experience and a great ministry opportunity.  We will only see the consequences in eternity, but I was used in various ways during this time.  I was also able to minister in an English International Church in Zurich and visit some refugee workers in Germany.  In between I was able to do a little bit of sight seeing, especially in Athens were I went hunting Paul’s footsteps on the Acropolis.

Before going I tried to prepare myself as best I could by reading and watching material as much as possible on the issue.  These are my observations hot off the press and requiring further  research. Besides doing some hands on ministry I tried to spend as much time as possible observing and engaging people who have been involved for much longer than I have.

One of the first questions I am asked is how much evangelism and ministry I was able to do, and how did it go.  While I understand the question there is some misunderstanding in this question based on our preconceived understanding of what ministry is.  No, I did not get many opportunities to evangelize.  Yes, I had many opportunities to show care and concern and actually help people in need and even at times to pray for them and with them.

The first thing we have to understand when we go into these types of situations is that there are legal constraints.  More about this a bit later.  But there are some very good reasons we need to carefully think about connecting our ‘humanitarian’ aid to ‘forcing’ people to listen to our message.  I am against forceful conversion. Having served in India we soon learnt the term ‘rice Christians’.  We need to guard against this.

Our duties varied I the camp.  From helping house people, to setting up and repairing ‘tarps’.  Visiting tents to see if the people where ok, handing out washing powder, shavers, trying to determine what clothing needs they had and then finding, if possible what they need in the clothing  container.  Helping with distributing tea at tea times.  Often having to accompany people from one point to another or being at a control point and only allowing certain people into some areas.  At one point I was asked to make some shelves from old pallets for the information tent.

So let me give you a few stories to illustrate the type of ministry I go to participate in.

After a few days of working at the information tent in the camp, one middle eastern young man, 21 years old had spent a lot of time  at the information tent interacting with us and helping here and there with translations.  During a quiet time one day, he was standing next to me and asked me why I had come to help.  My simple answer was because I was a Christian.  He then said he did not understand what that meant and could I explain what it means.  Because he had asked me, I now had freedom to share with him.  This was a wonderful time and opportunity.  This same young man was able to leave the camp with others and attend a Bible study nearby in that week.

In one of the tents I met some people from Eritrea. They were Christians and had fled due to persecution. Time and the circumstances we were in with other refugees present did not give them the freedom to share many details but they were prepared to share briefly.  They were very open to us spending some time in prayer together. This was a great privilege for me to be able to meet with them and pray.

In another tent I met a Nepali family who had lost everything during the earthquake a year ago.  They left Nepal and travelled to Turkey and now found themselves in this camp on Lesvos.  I asked them from where they flew.  Their whole trip, over a year was done by foot.  If you look at a map of the world you will see they had crossed many countries, some of them at war.  This is amazing tenacity and perseverance.

So the stories kept coming.  Following my time on Lesvos I did visit Germany very briefly to see how they deal with the refugees who arrive to stay.  The central German government apparently give every town a certain number of refugees to ca for.  The local town government receives funds per refugee and then have to feed the refugees and accommodate them.   There are different levels that the refugees go through as they are processed to determine if they qualify for refugee status.  We were not allowed to go into these centers where the refugees are housed because we were not accredited workers.  However we were told that many of these refugees are seeking the Lord and looking for churches to teach them. Many are putting their trust in Jesus Christ.

Ministry to refugees is a very complex and multi-faceted task to undertake.  Here are some of the categories that need to be considered in order to gain better insight into the situation, each of which are intricate to varying degrees. 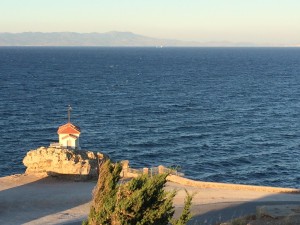 2.  Careful consideration of the legal aspects of the host country and/or countries refugees may move to or pass through. What rights do the different categories of people have?  Who has and takes what responsibility for the refugees?  Should migrants, if you categorize them differently to refugees, share the same rights and protection?  For instance, we were informed that to give a refugee a lift in a car could be seen to be participating in an illegal act of supporting and helping illegals in Greece and can lead to prosecution. The legal issues do not end there.  Many refugee camps are jointly run by local law enforcement bodies as well as the UN which in turn would have very clear legal guidelines and requirements. Humanitarian aid for instance, cannot be linked to any religious information being shared.  This would be seriously frowned upon and deemed unacceptable. 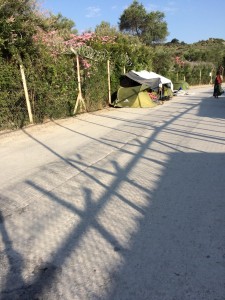 3.  Helping refugees and migrants while they are en-route, with the variety of cultural backgrounds they carry with them.  Cultural and national sensitivities can become problematic.   While those in the west may not understand the cultural issues or appreciate and even agree with national sensitivities, they are however present. A simple case of housing in a refugee camp for example, hereby becomes a major issue.  Do you house Iranians with Iraqi people?  Some tribes from within certain counties cannot tolerate each other, especially when they have a history of conflict from rural areas.  The Kurds and Turks along the border of Turkey and Syria is a current example. We have not touched on religious differences, although some of the above mentioned problems may have a religious undertone and be more or less prominent in the conflicts between the various tribes from within a country or people from neighboring countries.

4.  Terminology used. What is meant by the different terms that are employed:  What is a refugee? Who is a migrant?  Where do ‘conscientious objectors’ fit into the picture?   5.  The Biblical and theological positions taken up whether Christians should and should not be involved.

5.1. What type of involvement?  Where does the local church fit into the scheme of things?

5.2. The complications of offering humanitarian help linked to religious propagation?

5.3. Are we to be driven by the humanitarian need in the first place?  If so, does this mean that the group that gets their story told best by some international media person, gets the most help?

SOME DANGERS TO CONSIDER

Simple emotional reaction with no long term support can cause much psychological damage. Dealing with traumatized people, both children and adults needs to be approached with care and sensitivity. Our motivation for helping needs to be very clear and not simply a ‘knee jerk’ reaction or responding to a felt need of a humanitarian nature.  The goals and objectives, both short and longer term need to be clear.  Following through the process from the initial contact to the settlement and integration phase should also be considered. To what extent does one get involved with ‘illegal’ immigrants? This again is a different category of people in crisis.  Those who have entered a country, not primarily as part of a mass movement or as a result of a specific crisis but simply looking for another better life and have entered illegally, also need to be processed accordingly.

Having considered all of these facets, we have not even begun to address the huge dilemma of people-smugglers, human trafficking, criminals, religious extremism etc.

Friends, the harvest is indeed riper than ever before!

Would you pray with us about future involvement. Shelves being built to help create order in the information tent. 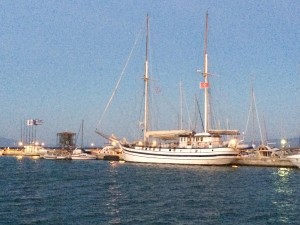 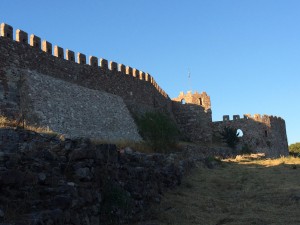 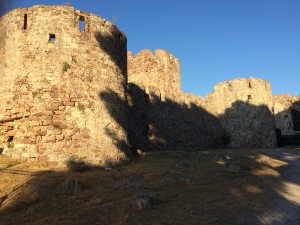